Are you looking for trustworthy, detailed information about Cushing Triad – a classic sign of increased intracranial pressure, and Beck’s Triad in Cardiac Tamponade? These are the most popular triads in the medical world. Whether you are a nurse who is searching for a useful guide about Cushing’s triad and Beck’s triad for USMLE and other exams, or you may be a paramedic, medical personnel, or anybody interested in medical terms, today’s topic is just for you. First, we will talk about Cushing’s triad and then we will move on to Beck’s triad. So, let’s begin. Cushing’s triad is also known as the brain herniation triad. It is the signs/symptoms developed by Cushing’s reflex.

Cushing Triad is important, but a late sign of raised intracranial pressure (ICP). The doctors, paramedics, and nurses must be looking for this condition in patients who have had a recent head injury, brain injury, neurosurgery, or anyone with a suddenly altered level of consciousness. It usually serves as a warning sign of brain herniation

Cushing’s reflex (and Cushing’s triad) can also be seen in the intravenous administration of epinephrine and other drugs of similar nature.

Whenever a Cushing reflex occurs, there is a high probability of death in seconds to minutes. As a result, a Cushing reflex indicates a need for immediate care. Since its presence is a good detector of high ICP, it is often useful in the medical field, particularly during surgery. Cushing’s triad is a clinical triad that consists of the following vital signs:

Other Signs and Symptoms of ICP (Cushing’s triad)

Along with 3 primary vital signs of Cushing’s triad, the following signs and symptoms are also common in ICP.

History and Etymology of Cushing Triad

The phenomenon of Cushing’s triad was first described by an American neurosurgeon, Harvey Williams Cushing (born April 8, 1869, Cleveland—died Oct. 7, 1939, New Haven, Conn., U.S.) in 1901. He was the leading neurosurgeon of the early 20th century.  Cushing’s Triad is named after him.

Harvey Williams Cushing graduated from Harvard Medical School in 1895 and then studied for four years at Johns Hopkins Hospital, Baltimore. He worked as a surgeon at Johns Hopkins from 1902 to 1912 and thenceforth he was surgeon-in-chief at the Peter Bent Brigham Hospital in Boston and professor of surgery at the Harvard Medical School. He joined the faculty of Yale University in 1933.

Cushing developed several operating procedures and techniques that are still basic to the surgery of the brain. He became the leading expert in the diagnosis and treatment of intracranial tumors.

His research on the pituitary body (1912) gained him an international reputation, and he was the first to ascribe to pituitary malfunction a type of obesity of the face and trunk now known as Cushing’s disease, or Cushing’s syndrome. He wrote numerous scientific works and received the Pulitzer Prize in 1926 for his Life of Sir William Osler (1925).

The immediate cause of Cushing’s triad is increased intracranial pressure. There are many conditions to increase ICP. Common causes are:

Traumatic brain injury and ICP leads to cerebral ischemia as a result of hypoxia and decreased cerebral perfusion pressure (CPP). To compensate for the hypoxia the activated sympathetic nervous system stimulates alpha 1 and beta 1 adrenergic receptors.

The brain thinks it is helping but can actually worsen the problem. Increased blood flow to the brain causes further bleeding, swelling, and resulting ICP. The compensatory mechanisms get caught in a continuous positive feedback loop.

Why there is a slow heart rate (bradycardia)?

Bradycardia is another vital sign of Cushing’s triad. Increased ICP stimulates the vagus nerve, which contributes to a drop in the heart rate. In case of severe herniation, pressure on the medulla oblongata can cause a decrease in heart rate as well.

Increased systolic blood pressure and increased intracranial pressure give rise to brain herniation. The brain herniation exerts pressure on the medulla oblongata (brain stem) – the respiratory center of the brain. The continuous pressure on it disrupts the function of the medulla oblongata and as a consequence, respirations become irregular. The disturbed respiration patterns commonly seen in Cushing’s triad are:

Best and the only treatment for any patient with ICP/Cushing’s Triad is rapid transport to the definitive care/surgery unit because it is a medical emergency. The maximum on-scene time should be limited to 10 mins. If ICP is accompanied by an active seizure, it should be treated.

Patients presenting with Cushing’s Triad have a high incidence of concomitant spinal cord injuries. It is necessary to maintain manual spinal immobilization until fully c-spined. Some studies have found that placement of a c collar can cause an increase in ICP. C collars are generally not form-fitting as it is placed too tightly which might reduce venous blood return away from the brain.

Maintaining ETCO2 of 35-40 is vital as ETCO2 less than 25 increases the chance of mortality. As the patient can’t regulate breathing, he should be assisted in ventilation. The patient with Cushing’s triad is likely to be completely unresponsive and the intubation may become difficult or impossible. Try to place the ET tube if possible.

Hypotension is unlikely in the patient with Cushing’s triad. Any patient with other signs of ICP that presents with hypotension should raise your suspicion for Hypovolemia, internal or external hemorrhage, spinal injury, or distributive shock.

The patient with Cushing’s triad should be positioned with head and trunk elevated 30-45 degrees to assist with the venous return from the head. Similarly, patients on a backboard should be elevated 15-30 degrees to facilitate drainage. Studies have suggested the use of chemical sedation in patients that are aggressive or agitated due to head injury. Researches have shown that increased stress and activity will increase ICP. All About Beck’s Triad in Cardiac Tamponade » The classical diagnostic features of cardiac tamponade (components of Beck’s Triad) are:

Almost 90% of patients of tamponade have at least 1 of the signs, but only one-third have all of the three signs. Furthermore, a late manifestation of cardiac tamponade shows all three signs, usually preceding cardiac arrest.

The terms Beck’s Triad are named after Claude Beck (1894-1971) who first described the concept of this medical triad in 1935. Claude Beck was an American cardiothoracic surgeon and Professor of Cardiovascular Surgery at Case Western Reserve University in Cleveland, Ohio.

What is Cardiac Tamponade?

According to DailyMedEd.com, Cardiac tamponade is a medical emergency that refers to a fluid accumulation around the heart. The collection of this fluid exerts pressure on the heart and decreases the ability of the heart to pump appropriately. As a consequence, there is a collection of three medical signs associated with acute cardiac tamponade, known as Beck’s Triad.

The double-layered pericardium surrounds the heart by the formation of a pericardial sac (filled with about 25 to 50 ml of fluid). The fluid essentially acts as a cushion and allows the heart to contract and expand in a smooth fashion by minimizing friction. When excess fluid fills the pericardial space, the pericardium is unable to stretch or expand to accommodate the increase in fluid.

If that pressure from the fluid becomes more than the pressure in the heart’s chambers, the heart will begin to compress and lose its natural ability to pump blood to the lungs and circulate blood to the rest of the body.

The signs of acute cardiac tamponade are hypotension, distended neck veins, and muffled heart sounds. The patient will also be complaining of dyspnea and chest pain along with the following signs:

Some other symptoms of tamponade that can accompany Beck’s Triad are: How cardiac tamponade leads to hypotension?

A physiological fall in arterial blood pressure occurs because the heart is hindered in its ability to pump blood. When the heart cannot contract efficiently, the rest of the body does not get supplied with the necessary amount of blood. This can result in the body going into shock and even cardiac arrest.

In short, the inability of the ventricles to contract properly reduces cardiac output resulting in hypotension.

Why does tamponade cause distended jugular veins?

The diastolic filling decreases because of the exerted on the right ventricle. As a result, blood flows back into the right atria and the veins that return blood to the heart, most notably the jugular veins.

In a patient with cardiac tamponade, the rising central venous pressure (jugular vein distension) will be present even when they are sitting upright.

How tamponade leads to distant or decreased cardiac sound?

Muffled heart sounds occur due to the insulating effect of the fluid in the pericardial sac. When sound travels through fluid, it sounds distant or suppressed as it is traveling through a thicker median.

In short, the decreased heart sound occurs because of the muffling effects of the fluid surrounding the heart (pericardium). 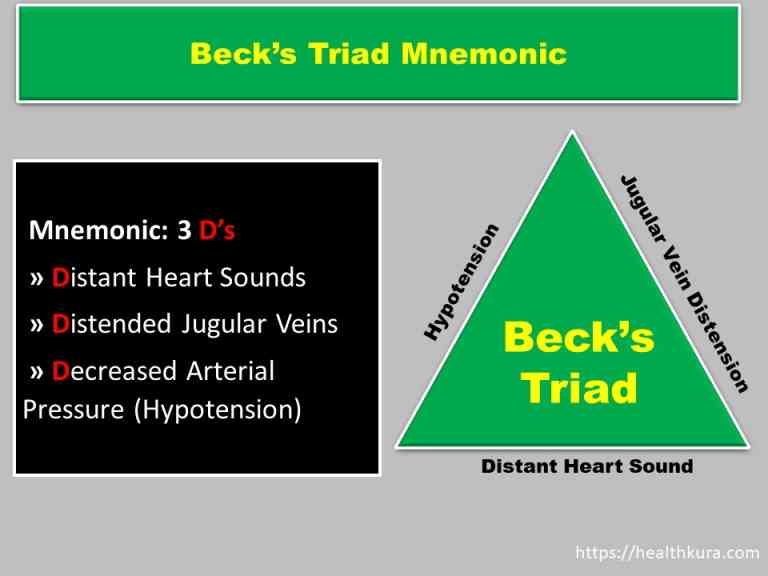 Some people might get confused about Beck’s Triad for Beck’s Cognitive triad of Depression. But it is a completely different condition that is associated with psychology and psychiatry. Also known as a negative triad, Beck’s cognitive triad is a cognitive-therapeutic view of the three key elements of a person’s belief system present in depression.

It was proposed by Aaron Beck in 1976. The triad forms part of his cognitive theory of depression and the concept is used as part of Cognitive Behavioral Therapy (CBT), particularly in Beck’s “Treatment of Negative Automatic Thoughts” (TNAT) approach.

YOU MAY ALSO LIKE: Hot Potato Voice or Speech in Peritonsillar Abscess

As it is a medical emergency, a patient with a cardiac tamponade triad needs immediate hospitalization. There is no intervention you can do pre-hospital for the patient. The doctor will treat the patient to relieve pressure on your heart and then treat the underlying condition. Initial treatment involves your doctor making sure you’re stabilized.

Your doctor will use a needle to drain the fluid from your pericardial sac. This procedure is called pericardiocentesis. Your doctor may perform a more invasive procedure called a thoracotomy to drain blood or remove blood clots if you have a penetrating wound. There might be a condition to remove part of your pericardium to help relieve pressure on your heart.

Let’s summarize Cushing triad in ICP and Beck’s triad in cardiac tamponade with the following questions:

Which of the given options best describes Beck’s Triad?

The Correct Answer is B – Hypotension, JVD, and muffled heart sounds.

Answer C – is incorrect. It describes Cushing’s Triad in pt. with increased intracranial pressure in cases such as traumatic intracranial hemorrhage from trauma.

Which of the given options best describes Cushing Triad?

Answer B – is incorrect. It describes Beck’s Triad in pt. with cardiac tamponade.

Health Kura does not provide medical advice of any kind. If you have any questions related to this, you can contact the related health care practitioner for more information. All About Rings in Eyes or Rings in Ophthalmology: White, Yellow, Copper, Cholesterol, Blue, and More » Rings in Cornea ︱Rings in Iris & Lens ︱Rings in Retina & Orbit RINGS in EYES or RI
Read More